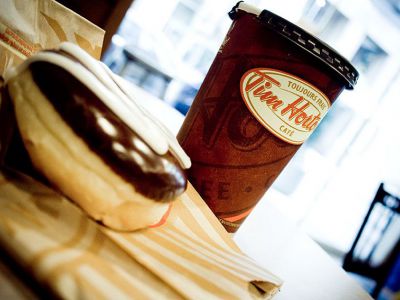 No proud Canadian misses out on an outing to Tim Hortons. Even though the coffee & doughnuts chain is nothing fancy or glamorous, entering one of the stores is always a comforting experience – locals affectionately call it a “Timmy time”. It’s like coming home!

Everything on the menu is tasty and much less expensive than other similar chains. Montrealers are always more than willing to encourage this truly Canadian company, founded by a hockey player in 1964. There’s even a popular saying stating that bad driving is tolerated if you are heading to Tim Hortons! If you are tempted to indulge on a doughnut and coffee break, you won’t need to look very far: there are over 10 branches open 24/7 in downtown Montreal alone. You can even take the pleasure back home by buying one of the coffee tins available in stores or in supermarkets, whether you opt for the regular flavor, a tasty hazelnut twist or a sweet French vanilla treat. Too bad their doughnuts cannot be exported as well!
Image Courtesy of Flickr and Will Keightley.