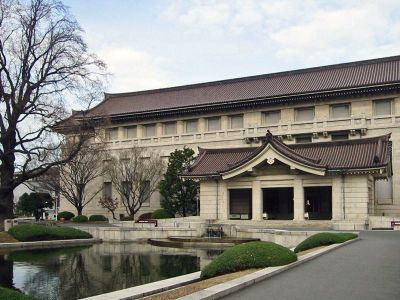 The Tokyo National Museum is the oldest and the largest repository of art and culture in Japan. It is also an education and research facility and has many books and documents relating to Asian art with a special focus on Japanese art and archeology.

The Tokyo National Museum began as a 20-day exhibition in 1872 within the Taiseiden Hall, a former Confucian Temple. The show was held by the Museum Bureau of the Ministry of Education. The objects displayed, formed the initial permanent collection of what later became the Tokyo National Museum. After the exhibition, the collection was moved to Uchiyamashita Cho and later to its permanent building in Ueno Park.

The Tokyo National Museum today, has five buildings. The Honkan with the Japanese Gallery was designed by Watanabe Jin and is a designated an important cultural property of Japan. It has 24 rooms displaying Japanese artifacts from 10,000 BC till the 19th century. The Tokoyan houses exhibits from other parts of Asia in 10 rooms and seven regional levels. The Hyokeikan inaugurated in 1909 is used for events and temporary exhibitions, the Heiseikan has a vast collection of Japanese archeological objects and the Horyu Ji Homotsukan contains treasures donated by Horyu Ji to the imperial household. The Museum has over 87 Japanese National Treasure holdings and 610 Important Cultural Property holdings.

Why You Should Visit:
Takes you through Japan's history and culture; very affordable, comprehensive and well displayed, with English explanations but the audio guide is also very useful.
The museum is located within the grounds of Ueno Park – a beautiful park especially during Sakura (Cherry Blossom) season or in autumn.
Amazing selection of gorgeous and interesting goodies in the gift shop, too.

Tip:
Take a 100 yen coin for the lockers (you will get it back!).
Taking pictures is allowed with the exception of some pieces that will be marked with "no photos allowed".