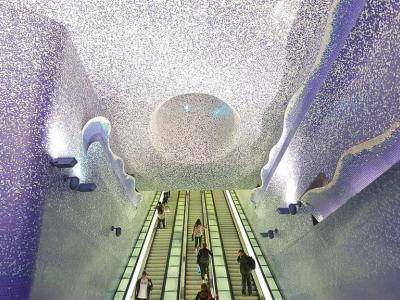 The Toledo Station won the 2013 Leaf Award as the Public Building of the Year. This impressive metro station was part of the Art Stations project, aimed at bringing art into people's daily lives. The Toledo Station is the most dazzling of the art installations and was nominated as the most beautiful transit station in Europe.

Visitors will notice three hexagonal pyramids outside the station. The Knight of Toledo, a steel statue, guards one of the entrances.

At 130 feet underground, the Toledo Station is one of the deepest stations in Naples. As you descend on the escalator, you will notice that each level has a different color representing a different theme.

The first floor is black, representing the asphalt of busy city life. Remains of ancient walls are included on the first floor. The atrium is decorated with mosaic tiles that depict historical scenes. One scene shows St. Gennaro, Naple's patron saint, leading a procession. The second scene shows the construction of the subway.

Yellow and ochre walls portray the bright Naples sun and volcanic tuff. As visitors continue to descend, the colors turn blue and green to represent the sea. An 80-foot long LED-lit installation shows an image of the sea with continuous waves on the quay floor.
Image Courtesy of Wikimedia and Andrea favia.