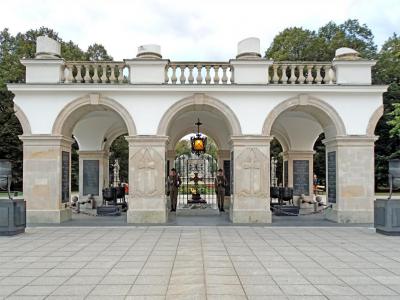 Tomb of the Unknown Soldier, Warsaw

Dedicated to the unknown soldiers who have given their lives for Poland, the Tomb of the Unknown Soldier in Warsaw is one of many such national tombs of unknowns that were erected after World War I and the most important such monument in Poland.

The monument, located at Piłsudski Square, is the only surviving part of the Saxon Palace that occupied the spot until World War II. Since 2 November 1925, the tomb houses the unidentified body of a young soldier who fell during the Defence of Lwów. Since then, earth from numerous battlefields where Polish soldiers have fought has been added to the urns housed in the surviving pillars of the Saxon Palace.

The Tomb is constantly lit by an eternal flame and assisted by a guard post by the Representative Company of the Polish Army. It is there that most official military commemorations take place in Poland and where foreign representatives lay wreaths when visiting Poland.

The changing of the guard takes place on the hour of every hour daily and this happens 365 days a year.

Why You Should Visit:
Not huge as other tombs "of the unknown soldier", but the design is most welcoming. It sits just next to a very beautiful park with a fountain and statues, as well as just 2 mins away from the National Opera – so it does make sense to add this destination to your city walk.

Tip:
If you time it right, you can see the changing of the guard. Be mindful not to go into the immediate area, however, as it is only for the soldiers on duty and also remember they are fine with you taking pictures but don't expect an answer if you ask them.
Image by Dennis Jarvis on Flickr under Creative Commons License.
Sight description based on wikipedia