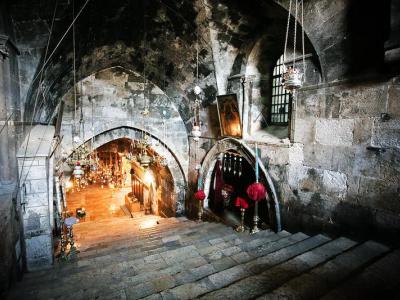 Tomb of the Virgin Mary, Jerusalem

Believed to be where the Disciples laid the Virgin Mary to rest, this underground sanctuary in the Valley of Jehoshaphat – right outside the City Walls and next to Gethsemane – is one of Jerusalem's most intimate and mystical holy sites.

The fairly nondescript facade, the impressive flight of nearly 50 steps built by the Crusaders, and the side tombs halfway down (believed to have been used for royal burials during the Crusader period) all date from the 12th century. The tomb on the right, going down, is venerated as that of Mary's parents, St Anne and St Joachim.

At the bottom of the staircase, in the eastern branch of the crypt, you will find iconic images of the Virgin Mary as well as a richly decorated aedicule (shrine) on the place believed to be where Mary was laid to rest. While smaller, this structure resembles the aedicule at the Church of the Holy Sepulcher which marks the Tomb of Christ.

Worshippers and visitors often come here to attend religious services held by Greek Orthodox, Coptic, Armenian, Syrian and Ethiopian Christians who all share the altar. Since Islam venerates "sister Mary", you will also find a mihrab indicating the direction of Mecca, with Muslims being granted use of the area to pray.

Why You Should Visit:
The tomb is very well maintained and it is certainly something Christians should like to see.
The church is the only one in the world where you go DOWN the steps to enter.

Admission is free and it is open from 6 until noon, closing for lunch like many Holy Sites and re-opening from 2:30-5pm.
Image by WomEOS on Flickr under Creative Commons License.