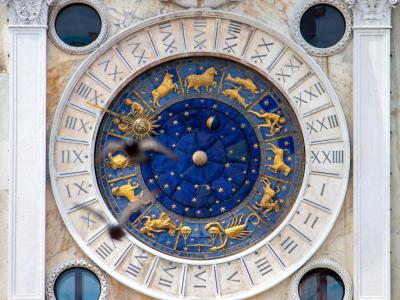 In a square filled with iconic Venetian buildings, this remarkable Renaissance clock tower holds its own. Its base has always been a favorite meeting point for Venetians as it marks the entrance to the ancient Merceria, one of the busiest streets in Venice, now home to both high-end boutiques and trinket shops.

The tower's clock itself was made the official timekeeper of Venice as far back as 1858. It notably not only tells the time but is also aid to the astrologer, matching zodiac signs with the position of the sun.

Above the clock's face, against a field of golden stars, you can see a winged lion of St Mark, symbol of Venice found practically everywhere around the city. Beneath the lion is a statue of the Virgin Mary and Baby Jesus who also seem to be watching over Piazza San Marco.

The two men striking the bell at the extreme top of the clock tower are some of the most peculiar Venetian characters. Originally, these were two shepherds who, but after being reproduced in bronze, grew significantly darker with time, and thus, got the nickname of “Moors”.

If you decide to climb the tower, you may want to book a tour. There are two English tours run every day, each limited to 12 people only. On this tour you will see a secret door and then stop at every level all the way to the top to observe the clock mechanism and other curious things within the tower, along with San Marco square itself down below.
Image Courtesy of Flickr and Paolo Trabattoni.