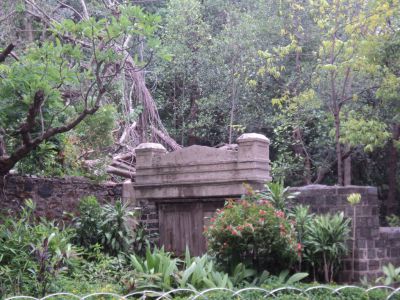 The Zoroastrians first migrated to the Indian subcontinent during the 10th century AD and have since been an integral and important part of the Indian community. The city of Mumbai has always been home to a large population of Parsis. The Tower of Silence was built in 1672, by Seth Moti Hirji. The Tower is where the Parsi community performs the last rites for the departed. According to Zoroastrian belief, the earth – Zam and fire- Atar are considered pure and divine. The body of the dead is considered as a pollutant and hence the dead are disposed off atop of a tall tower, to be putrefied by the sun and birds of prey. The Tower of Silence is strictly off limits for unauthorized personnel, but the surrounding area is open for visitors and tourists. Despite the obvious nomenclature for the place, the Tower of Silence must not be looked as place of peace and tranquillity.
Image by PP Yoonus on Wikimedia under Creative Commons License.

This sight is featured in a self-guided walking tour of Mumbai, India within the mobile app "GPSmyCity: Walks in 1K+ Cities" which can be downloaded from iTunes App Store or Google Play. Please download the app to your mobile phone or tablet for travel directions for visiting this sight. The app turns your mobile device to a personal tour guide and it works offline, so no data plan is needed when traveling abroad.

Mumbai is a city where modern and traditional lifestyles exist side by side. The city features many impressive religious sites where you can have a peaceful moment and detach from the hustle and bustle outside. Due to the presence of many different religions and sects in Mumbai, the city is home to lots of great temples, churches and mosques. Take our tour to see the most interesting places of...  view more