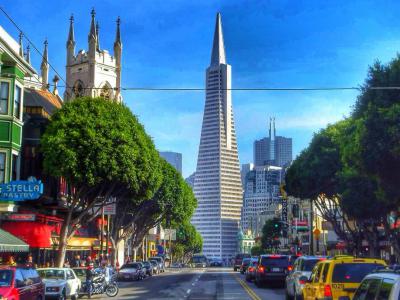 The Transamerica Pyramid stands as a monument of modern architecture and design in the almost Victorian landscape of San Francisco. Today, the building stands as a unique symbol of the city with its sharp and well-defined lines and ultra-modern architecture while demonstrating the merger of the old with the new.

Although the Transamerica Pyramid does seem to blend in with the city’s landscape, initially it did not go very well with many of its denizens. The architect of the building William L. Pereira faced much opposition, regarding the radical structure of the building which would clash with the Victorian style of surrounding architecture. However, Pereira believed that the structure would be a statement of architectural brilliance, and very much so, the Transamerica Pyramid today is one of the modern day symbols of San Francisco.

Why You Should Visit:
While the views from further away (e.g. Coit Tower) are probably more interesting, up close you can easily see the curves as the building rises.
Image Courtesy of Flickr and alyssa BLACK..