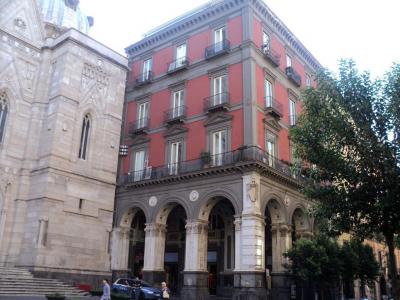 The Treasure of Saint Gennaro Museum displays the wealth of offerings made by popes, aristocrats and the common people to the patron saint of Naples, St. Januarius. It is located within the grounds of the principal cathedral of the city.

The Treasure of Saint Gennaro Museum was opened to the public in 2004. At first, the idea of setting up the museum met with resistance from the local people who felt that displaying the treasure for all to see was irreverent to their patron saint. Its planning took eight years and after another seven years the entire collection was displayed.

The Treasure of Saint Gennaro Museum has over 25 display cases with artifacts made of bronze, silver and gold. Each is a work of art, showing the brilliant craftsmanship of Neapolitan sculptors and metalworkers. The earliest object on display is from the 1300s. Most of the exhibits were crafted in the 1600s and the most recent one is from the early 1900s. There are bronze busts of the saint, crucifixes, religious objects made of silver, including chalices, candelabras, plates and other liturgical exhibits, a two foot tall miter, covered with emeralds and rubies, and the necklace of Saint Gennaro, hung with crosses containing sapphires and rubies. Audio guides are included in the price of the entrance ticket for the benefit of international visitors.
Image by va_va_val on Wikimedia under Creative Commons License.