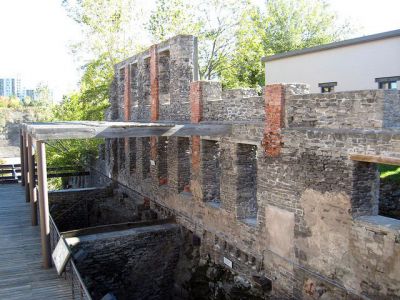 As an archaeological site, Triphammer Forge provides an exciting glimpse into the city's industrial past. These ruins have been stabilized, allowing visitors to walk by without disturbing any of the artifacts present. The massive water wheel has been reconstructed, demonstrating the importance that this area once held in the manufacturing industry in New York.
Image by berriehol on Flickr under Creative Commons License.

Want to visit this sight? Check out these Self-Guided Walking Tours in Rochester. Alternatively, you can download the mobile app "GPSmyCity: Walks in 1K+ Cities" from iTunes App Store or Google Play. The app turns your mobile device to a personal tour guide and it works offline, so no data plan is needed when traveling abroad.