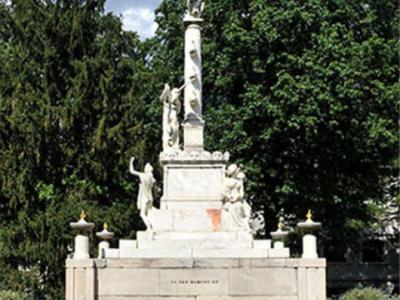 The monument is made of Carrara marble with a sandstone base, and measures 360 by 192 by 192 inches (9.1 m × 4.9 m × 4.9 m). Designed by Giovanni Charles Micali, it was carved in Livorno, Italy in 1806 and brought to the United States on board the famous 1797 frigate USS Constitution ("Old Ironsides"). From its original installation in the Washington Navy Yard at the new national capital of Washington, D.C. in 1808, it was later moved to the west front terrace of the United States Capitol facing the National Mall in 1831, and finally to the United States Naval Academy campus in Annapolis, Maryland in 1860.

The white marble sculpture consists of a 30-foot high column topped by an eagle and mounted on an elaborate base adorned with allegorical figures representing Glory, Fame, History, and Commerce. History, on the northwest corner, is represented by a seated female figure holding a book in her proper left hand and a pen made of bronze gilt in her proper right hand. She looks up and begins to record the event that she sees. Commerce, on the northeast corner, is represented by a male figure pointing to the column with his proper right hand and holding a caduceus in his proper left hand. Winged Victory stands beside the column, her proper right hand holding a laurel wreath over a sarcophagus and her proper left hand holding a bronze gilt palm branch. The column is adorned with two rows of antique "beaks of galleys" and two rows of antique anchors carved in relief. The sculpture rests on a square base constructed with blocks of stone and adorned with an urn on each corner.
Image by Employees of the United States Naval Academy on Wikimedia under Creative Commons License.
Sight description based on wikipedia