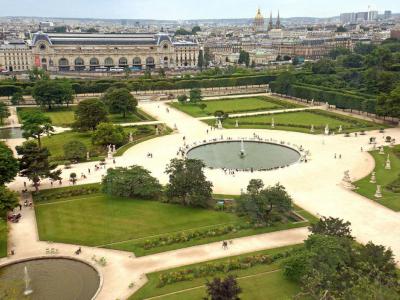 Nowadays a lovely park, the Tuileries Garden has been a witness to some of the most turbulent events in French history. Centermost of all the Paris city parks, it forms part of the triumphal axis (the so-called “Grand Axe”) stretching from La Défense plaza all the way to the Louvre. The garden is almost totally flat and has a circular fountain in the middle, which is most popular in summer.

Originally, this Italian Renaissance-style garden was created for Queen Catherine de Médici who, in the 16th century, began construction of a palace just outside the western walls of the capital, which took the name of the tile factories (called “tuileries”) that it replaced.

In 1789, following the fall of the Bastille, King Louis XVI and his wife, Marie Antoinette, moved into the palace in a publicity stunt to get “closer to the people.” Sadly, this stunt eventually produced the undesired effect and resulted in the royal family being locked up in the palace under house arrest. Three years later, the Tuileries Palace came under attack in what proved to be the defining moment of the French Revolution. The French monarchy was abolished as a result, and quite radically so, with the help of the then newly-invented guillotine installed in Place de la Concorde. The last king of France, as he rose to the scaffold, turned to his captors and said: "Gentlemen, I am innocent of everything of which I am accused. I hope that my blood may cement the good fortune of the French."

In the 19th century, Napoleon merged the Tuileries with the Louvre in a bid to create one huge super-palace complex. The project was barely completed when, during the bloody revolutionary uprising of 1871, the former royal Tuileries Palace was set on fire and completely destroyed. But the palace garden survived and still retains the general outline of the original master-plan.

In the 1990s, the landscape was renewed as part of the Grand Louvre project. Now free to access, the park is an oasis of calm amid the bustle of Paris. At visitors disposal here are a good number of green chairs to sit on and enjoy ice cream or drinks, plus a pond with small rented boats from which one can enjoy a marvelous view of the Eiffel Tower or simply unwind to the chirp of the local birds.

Tip:
Don't just stay in just one place – explore a variety of views and spots, as each provides a different perspective!