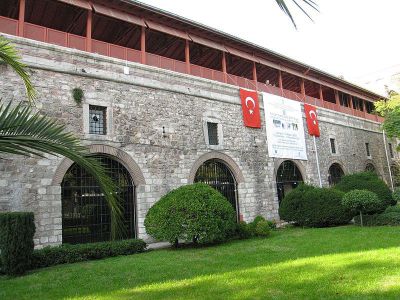 The Turkish and Islamic Arts Museum in Sultanahmet Square sits in a palace that has a great deal of archaeology and history attached to it. The palace was built in 1524 above the underground ruins of an ancient Hippodrome, and was designated for Pargalı Ibrahim Pasha, a confidant and second grand vizier to Sultan Suleiman the Magnificent, who later also married the Sultan's sister, Hatice Sultan. As history has it, the higher the climb, the greater the fall. Jealous people, including the Sultan's wife, didn't like the influence Ibrahim Pasha had on the monarch and eventually convinced Suleyman in Ibrahim's disloyalty, so he had him executed.

But the palace remained and today houses a museum showcasing over 40,000 exhibits of Islamic art – primarily from the Ottoman era, but also a substantial collection from the earlier Seljuk Turkish period, including illuminated Korans, carpets, miniature paintings, notable examples of Islamic calligraphy, tiles, ceramics, rugs and wooden carvings. In the basement there are interesting ethnographic displays on various cultures of Turkey, particularly the nomadic groups, recreating dwellings from different historic epochs and regions.

Being just a stone's throw away from the tourist hot spots of the Blue Mosque and Hagia Sofia, this museum offers an enjoyable break away from the hustle and bustle of the Old Town.
Image by Chapultepec on Wikimedia under Creative Commons License.