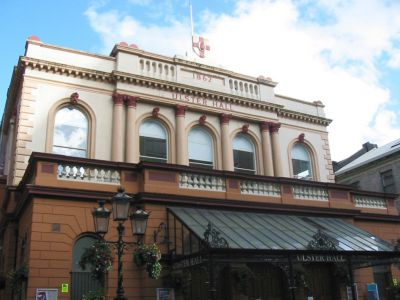 The Ulster Hall is a concert hall and historical building in Belfast. Situated on Bedford Street in Belfast city center, the hall hosts concerts, classical recitals, craft fairs and political party conferences. Despite the opening of larger concert halls in the city, such as the Waterfront Hall and the Odyssey, the Ulster Hall has remained a very popular venue, and is considered to evoke much more atmosphere than the newer venues.

Built in 1859 and opened in 1862, the hall's purpose was to provide the expanding city of Belfast with a multi-purpose venue of sufficient size. The Ulster Hall features one of the oldest examples of a functioning classic English pipe organ. The Mulholland Grand Organ is named in honor of former Lord Mayor of Belfast, Andrew Mulholland, who donated it to the hall in the 1860s. It was built by William Hill & Son and donated after the hall was officially opened. In the late 1970s, the organ was extensively restored to Hill's own original design. Mullholland's great-great-grandson, Henry Mulholland, 4th Baron Dunleath, oversaw the restoration.

In 1902, Belfast City Council commissioned the local artist Joseph W. Carey to produce thirteen scenes from Belfast history on canvas, to be mounted within the Ulster Hall. The scenes depict the city and the surrounding area, incorporating historical and mythological influences.

In 2007, a major refurbishment plan was done to restore the venue back to its original condition, while also modernizing the building's facilities and providing better disabled access.
Image Courtesy of Wikimedia and Man vyi.
Sight description based on Wikipedia.