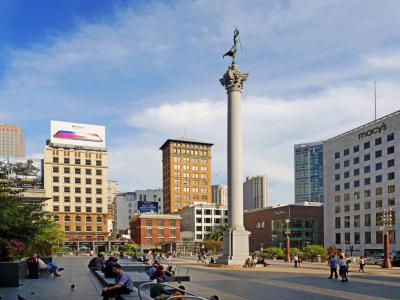 While there are lots of tourist sights in San Francisco to behold, there is none more representative of the city's spirit than the iconic Union Square. With so many layers of history, cuisine, commerce, and culture gathered in one spot, it is no wonder that this place has appeared in film and television scores of times over the years! One could teach a master class on the goings on at Union Square through the decades.

Starting from the pro-US rallies during the Civil War (hence the "Union" name) to the red-light district on (ironically) Maiden Lane, the Dewey Monument, and Alma Spreckels, the St Francis Hotel and its famous guests, the 1960s protests, the Theater District, the Powell cable car line, the Flood Building, and the Woolworth's counter – the list is long. Add to this the rooftop amusement park, the concerts, the window displays, and key appearances in famous movies – and you get the place that is quintessentially San Francisco in much of the same way as Times Square is for New York City.

Nowadays, the square is known as a sanctuary for the shopaholic at heart, ringed by premium boutiques, high-end department stores, and mega-brands – but also as one of maybe two places in the city where you can go ice-skating outdoors during the winter.

If you're looking for the best cheap eats, consider Sear's Fine Food or the Pinecrest Diner. For mid-range – there's Cheesecake Factory with a spectacular view of the square and the unforgettable Rotunda at Neiman Marcus. And if you want to go posh, there are too many choices, but Scala's Bistro at the Sir Francis Drake Hotel is ideal; also, The Oak Room, if you have the means.

Finally, no tour of Union Square is complete without visiting the venerable Hotel St. Francis, where kings, presidents, movie stars, and other historical figures from every field have stayed. In its grand lobby stands an antique clock, and the phrase "Meet me at the clock" is known to most San Franciscans. During holidays, the hotel is decked out in festive décor, with a giant chocolate castle diorama to salivate over. It feels like stepping into a bygone era of luxury and superb service.

Given the range of delights available at Union Square (stores, restaurants, theaters, as well as the famous cable cars), it is safe to say it is at the heart of it all and makes a logical starting point for the exploration of San Francisco.

Tip:
Take the Powell/Hyde cable car ride (which starts and ends at Union Square) for the best views of the city. And don't mind the line if there is one – it can move quickly.
Image Courtesy of Flickr and Bernard Spragg. NZ.