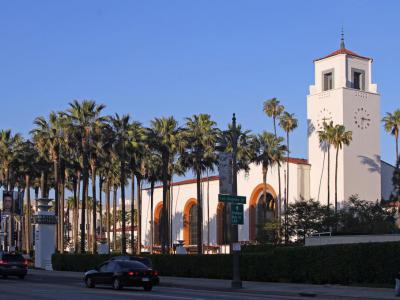 Los Angeles Union Station (LAUS) is the main railway station in Los Angeles and the largest railroad passenger terminal in the Western United States, serving almost 110,000 passengers a day. It opened in May 1939, replacing La Grande Station and Central Station (hence the “Union” name), and was the last of the great American rail stations to be built. Today the LAUS sits on the outskirts of New Chinatown, on the plot of land originally occupied by the Tongva village of Yaanga, believed to have been the largest of the Tongva villages, which later marked the heart of L.A.'s Old Chinatown. As the matter of fact, the original Chinatown neighborhood was demolished to make room for the station, sparking fears that it might "forever do away with Chinatown and its environs."

Originally intended as a transcontinental terminus station for the Union Pacific, Santa Fe and Southern Pacific Railways, the LAUS was a major hub for troop movement during World War II. With the advent of air travel, train service declined at depots across the country, including Union Station. As of the 1970s however, the growing use of Amtrak and expansion of local and regional rail revitalized the station as a major transportation hub of Southern California.

Designed in a Spanish Colonial Revival style, the station combines Mission Revival-exterior with Streamline Moderne interior, featuring marble floors, high ceilings and decorative tiles, all of which make it a handsome place and vibrant symbol of downtown’s renaissance. Designated as a Los Angeles Historic–Cultural Monument in 1972, the building was then placed on the National Register of Historic Places in 1980. In 1992 the station was fully restored, and in 2019 celebrated its 80th birthday.

This iconic Los Angeles landmark is well maintained and has a few restaurants and a beer pub on the premises. It often hosts concerts and exhibitions too, and, as such, is a dynamic destination for the arts, entertainment and culture, being more than just a bustling transportation hub in the heart of the city. As a true cultural destination connecting the infinitely varied and wonderful elements, it is also a great place for photography, well worth a visit if you have some extra time in L.A.
Image by John O'Neill on Wikimedia under Creative Commons License.