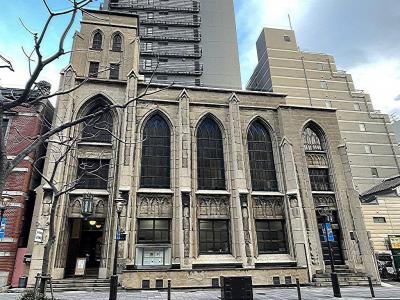 The United Church of Christ in Japan (UCCJ) Naniwa Church is a Protestant Christian Church located in the Chuo-ku area of Osaka. Since its foundation, the parish has contributed to education, medical services and Christian missionary activities in the city.

The United Church of Christ in Japan (UCCJ) Naniwa Church was established as a small congregation of about eleven parishioners in 1877. The Reverend Jo Nijima was the first pastor. He went to Kobe to learn English and became a Christian after being influenced by the teachings of the missionary Daniel Crosby Greene. After becoming pastor, Reverend Nijima established a school for girls and another well known school called the Plum Blossoms School.

The United Church of Christ in Japan (UCCJ) Naniwa Church building was constructed by the Takenaka Corporation under the supervision of an American missionary named William Merrell Vories who came to Japan in 1905. Construction was completed in 1930. The building has a simple yet graceful structure. It has three floors, Gothic steeple windows with yellow green stained glass. The chapel has a friendly and relaxed environment designed to make common people feel at ease. The sanctuary on the 2nd floor has a halo of gentle colors created by the light coming through the stained glass windows.
Image by 663highland on Wikimedia under Creative Commons License.