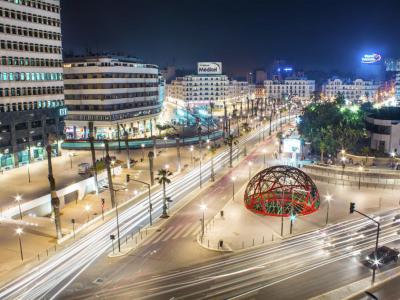 Central to its history of modern Casablanca is United Nations Square. It was once simply the Souq Kbir, a market square. Of the European powers, France, in particular, liked Casablanca very much and in 1908 France came to call.

The French commander, Charles Marechal Joseph Dessigny, said hello with an artillery barrage and an invasion. This was a tad rude, but now France had arrived in Morocco. To drive home the point, Dessigny ordered a clock tower built in what ultimately was to become United Nations Square.

The old Souq Kbir immediately was renamed "Square of the Clock." The name soon changed again to the more assertive, "Square of France." This gave everyone assurance of permanence. A planing group led by General Hubert Lyautey and architect Henri Prost soon gave the square and the town a thorough re-do.

At the south end of the square, Hippolyte Delaporte and August Perret erected their Magazins Paris-Moroc in 1914. Hubert Lyautey opened the new State Bank of Morocco on the northeastern side of the Square. The Bank is currently named Bank al-Maghrib. The neo-Moorish Hotel Exchelsior went up in 1916.

The clock tower was replaced by a copy tower in 1993. Several buildings on the square were demolished to make way for the Avenue of the Royal Armed Forces created by planner Michel Ecochard. Architect Jean-Francois Zevaco designed Kora Ardia, a remodeling of the square including a geodesic dome.
Image Courtesy of Wikimedia and Achalhikarim.