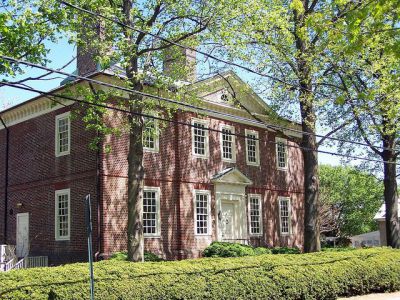 The Upton Scott House is a historic two-and-a-half-story, rectangular brick dwelling designed by William Brown. It shares a similar outward appearance with Brown's own home on the South River, now known as the London Town Publik House, but is much more elaborately finished. The property was built for Dr. Upton Scott, the personal physician to the Royal Governor of the Province of Maryland, and is of the transitional Georgian style.

In 1753, Dr. Upton Scott came to Maryland to serve as personal physician to Governor Horatio Sharpe. He purchased his lot in 1759 but did not begin construction until 1762, employing the services of William Brown to oversee the work. Scott’s house, surrounded by handsome gardens, was completed in 1765. After the Revolution, Robert Eden, Maryland’s last colonial governor, lived with the Scotts when he returned to the new state in hopes of claiming compensation for property seized during the war. Eden’s efforts failed, and he died here in 1784. The Scott’s nephew, Francis Scott Key, lived in the house while he was a student at St. John’s College.

The Upton Scott house boasts lavish interior and had sustained only minor alterations in the 20th century. In 1975, it was listed on the National Register of Historic Places.
Image by Bottlesplus on Flickr under Creative Commons License.
Sight description based on wikipedia