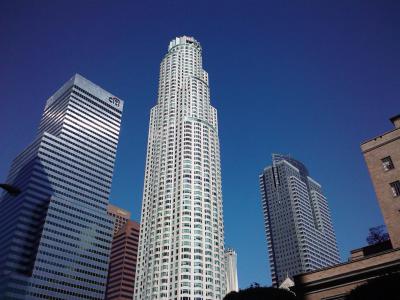 The US Bank Tower isn’t open to public tours, but you should go and see this wonderful building anyway, which is one of the city’s icons and is the 47th tallest building in the world.

The building, also known as the Library Tower, stands on West 5th Street in Los Angeles’ business area. It is 310 metres high, with 73 storeys and two underground parking levels. Built of glass and steel with a white granite curtain wall, it was designed to resist an earthquake of up to 8 on the Richter scale. Its architecture of overlapping spirals and cubes make the building both circular and square. It was built in 1989 by the architects Pei Cobb Freed and Partners.

On top of the building, in accordance with building laws, there is a heliport – the highest in the world. The glass crown on top of the tower is illuminated at night; the colours vary depending on the day, the season and even on which of Los Angeles baseball or basketball teams is playing in the city.

You will probably recognize the tower, as it has been used as the backdrop of various films – it has the distinction of being the first building destroyed by the aliens in Independence Day!
Image Courtesy of Wikimedia and Selvingarcia.