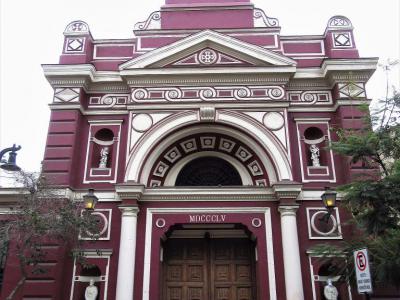 Pedro de Valdivia, a conquistador and founder of Santiago, has many monuments erected in his honor. Of these, the most notable, perhaps, is the Veracruz church, located in the Lastarria district of Santiago. The temple was built in 19th century as a memorial to this historic figure.

The structure itself is an architectural feat, although quite simple in its appearance, which is probably where its true beauty lies. The facade features vertical lines, as well as a doorway with Doric elements. There are two neoclassic houses at its side where all the parish work takes place.

The interior of the church is just as beautiful and is dominated by the figure of Jesus Christ, donated by the Spanish King in the 16th century. The figure was presented to the religious order of Our Lady of Mercy and since then pilgrims have made their way to the church every year to pay homage to it. In 1983, the Veracruz church was acknowledged for its uniqueness, as a piece of both historic and architectural heritage, and was declared a national monument.
Image by Paul Lowry on Flickr under Creative Commons License.
Sight description based on wikipedia