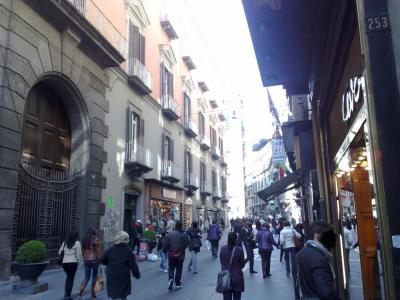 Visitors can stop at the Monument to the Martyrs in the Piazza dei Martiri. This 19th-century monument features four lions representing anti-Bourbon revolts in 1799, 1820, 1848, and 1860.

The Church of Sant'Orsola di Chiaia was restored in the 18th century and has treasured frescoes on the nave arches.

The Teatro Sannazzaro was built in the 19th century. After serving for a time as a cinema, it was restored to use as a theater in 1971.

At the west end of Chiaia Street, visitors will find the Chiaia bridge used to connect Pizzofalcone and Mortella. This neoclassical bridge was built in 1636 and features marble decorations.
Image by IlSistemone on Wikimedia under Creative Commons License.