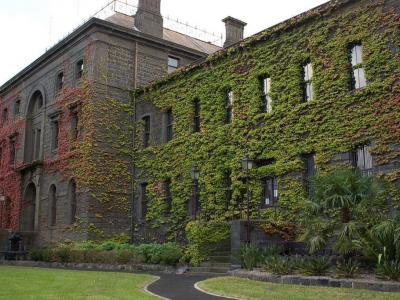 Located on St. Kilda Road, the Victoria Barracks are an important part of both Victoria and Australia’s history. The barracks were originally built as accommodation for the soldiers who were involved in quashing the Eureka Stockade rebellion during the Victorian gold rush. Today you can still see the original bluestone buildings dating from the 1850s.

Upon federation, the Victoria Barracks were made the administrative center for the Australian army, then during World War I to assist with communication between the army, the navy and air force moved onto the site. During this time the barracks provided accommodation for the soldiers as well as travelling War Cabinet ministers and the prime minister. Space was limited and so extensions were added in 1917, followed by an art deco style building added in 1939 upon the outbreak of World War II.

During World War II, the barracks were again put to use as a meeting space for Australia’s War Cabinet, which was made up of senior politicians in both the ruling and opposition parties. There are rumors of a tunnel leading from the barracks down to the Yarra River, to whisk away cabinet members to safety in the event of an air raid.
Image Courtesy of Wikimedia and Rexness.