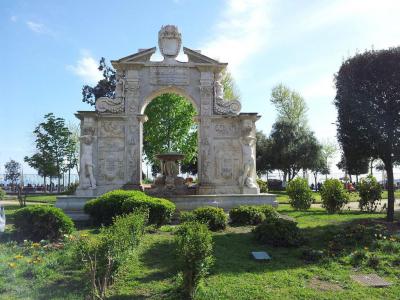 The Villa Comunale or People’s Park has well manicured lawns and tree lined paths today. It is studded with fountains, neoclassical sculptures and busts commemorating heroes who were born in Naples in the late 19th and early 20th century. The Anton Dohrn Aquarium and Zoological station, a well known scientific research center and the Naples Tennis Club are located here. A popular antique market called the Fiera Antiquaria Napoletana, is held in the Villa Comunale on weekends all through the year.
Image by Baku on Wikimedia under Creative Commons License.