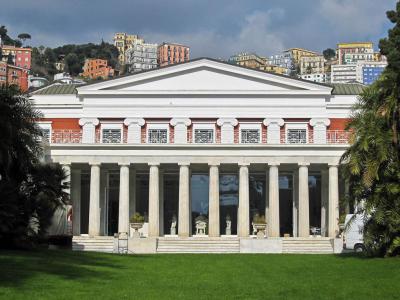 The Villa Pignatelli, from the date of construction has remained the architectural centerpiece of the Villa Comunale. The Doric columns in the façade can be seen by viewers from 50 yards away. Today, it is a venue for exhibitions and temporary shows and houses a small museum. The ground floor consists of a magnificent ballroom, a library, a large dining room and a series of rooms where museum objects are displayed. The green room houses the display of porcelain objects from the 17th to the 19th centuries and other rooms exhibit valuable sculpture and landscapes. The treasure at the museum is the painting of St. George by Francesco Guarino. The grounds of the Villa Pignatelli host a small coach museum with 18th and 19th century French and German vehicles on display.
Image by jzpresto on Wikimedia under Creative Commons License.