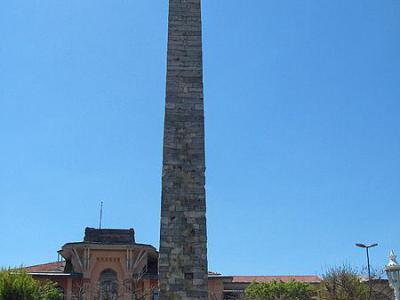 The Walled Obelisk, also called the Constantine Obelisk or Masonry Obelisk can be seen at the south end of the Hippodrome of Constantinople, (now Sultanahmet Square) – a popular spot in Istanbul, with the Egyptian Obelisk, the German Fountain, and the famous Hagia Sophia and Blue Mosque also closeby.

Although its original construction date is unknown, the 32 m (105 ft)-high obelisk was reconstructed of roughly cut stones by Constantine VII in the 10th century. At that time, it was reportedly decorated with gilded bronze plaques that portrayed the victories of Basil I, the grandfather of Constantine VII, and had a sphere at its top. However, reportedly these gilded bronze plaques were stolen and melted down by Fourth Crusaders in 1204. The obelisk suffered further damage to its surface by young Janissaries (the Ottoman Sultan's household troops), who liked to climb the structure to show off their prowess. Today, it is visited by tourists from far and wide.
Image Courtesy of Wikimedia and Georges Jansoone / JoJan.