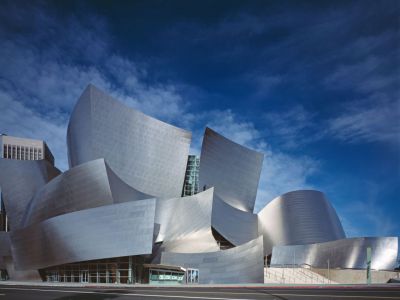 No classical music lover should pass up a concert at the Walt Disney Concert Hall – home of the Los Angeles Philharmonic Orchestra and the Los Angeles Master Chorale. Considered one of the best concert halls in the world it was built by Frank Gehry and opened in 2003, following an initial $50 million donation by Lillian Disney, Walt Disney's widow. The building is on six levels and its elegant stainless steel curves are formed to resemble a bowl of white roses as a tribute to its generous benefactress.

Concert hall buffs may find similar vibes between this and the Berlin Philharmonic Hall (Berliner Philharmonie) in both the exterior lines and the internal layout, despite the fact that the two were built 40 years apart and on two continents. The magnificent acoustics, designed by Yasuhisa Toyota, allow for every orchestral sound – including adagios – to be point sharp, even at the furthest point from the stage. In turn, seating is well designed and extremely comfortable, providing unobstructed views of the performance throughout the entire hall, no matter the seating arrangement.

The LA Philharmonic concerts (yes, they are the best in town) would easily cost $100-300 per ticket, but a little research and planning in advance may get you in for ten times less! One way is to look for the $20 tickets that they offer every season – only a few concerts per season, but if you can find them, it's a great deal. Another way to enjoy a decent concert is to look for California Philharmonic events. This smaller orchestra also performs here regularly and their tickets are quite affordable.

Why You Should Visit:
For lovers of architecture and/or art and music, this is an amazing place to go see!
The free self-guided tour is well worth taking if you have time to spare during the day.

Tip:
Just leave an ID for the audio guide and you can spend around an hour taking the tours and enjoying the lovely little 3rd-floor park with its huge marble lotus flower.
Image Courtesy of Wikimedia and Carol M. Highsmith.