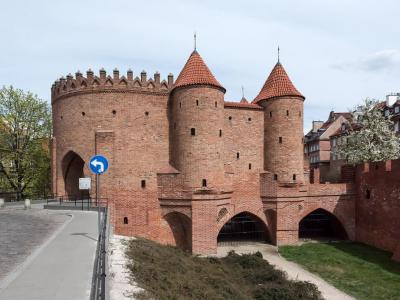 The Warsaw Barbican is one of the last remaining relics of the extensive network of walls, fortifications, and gates that once surrounded the city. It was built in 1540 and designed by Italian Renaissance architect Jan Baptist the Venetian. It replaced a gate on Nowomiejska Street.

In the 16th century, while Jan Baptist was living and working in Mazovia, the city's 14th-century walls were in disrepair. The barbican was part of his revitalization project. It took shape as a three-level semicircular bastion that was 14 meters wide and 15 meters tall. There was also a 30-meter-wide moat around the outside of the city walls.

Unfortunately, by the time the barbican was completed, it had become obsolete. Artillery technology had advanced considerably. It was used for its designed defensive purpose only once during the Swedish Invasion in 1656. Over the following years, the barbican was partially dismantled and modified to allow for a larger gate into the city. In the 1800s, part of the structure was incorporated into new apartment buildings.

Like many other Warsaw buildings, the barbican was more or less destroyed during World War II. It was rebuilt in the 1950s from 17th-century etchings. The Museum of Warsaw operates The Barbican. For more information about the history of the city, visit them in Old Town Market Place.
Image by Adrian Grycuk on Wikimedia under Creative Commons License.