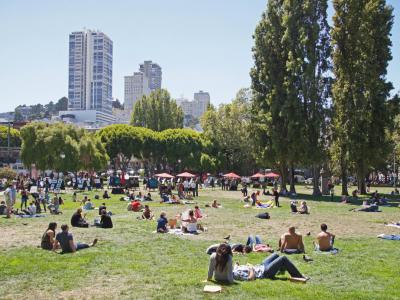 In the centre of the park is a small bronze statue of Benjamin Franklin which was donated in 1879 by the first millionaire of San Francisco, Henry Cogswell to honour the fire fighters of the city of San Francisco. An interesting fact is that when the statue was erected at the site, a time capsule with Henry Cogswell’s belongings was also buried. It was excavated a century later in 1979 and was replaced by a new time capsule will be opened in 2079.

The park is a favourite spot for the locals who come here to do tai-chi, walk their dog or just relax.
Image Courtesy of Flickr and Allie_Caulfield.