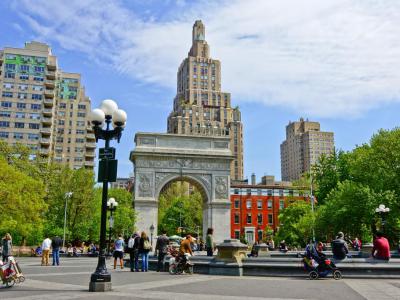 Once the delta of a river, this friendly town square-cum-park has adapted to the many needs of New Yorkers over the decades and is still one of the most frequented meeting points for many in New York City – from students to nearby residents to tourists. Whether it be sketch artists, quirky street performers, seasonal events (like the Halloween Parade), chess hustlers or would-be social media models, it's always rife with energy and activity – a physical and spiritual heart of Greenwich Village.

Aside from the human aspect, the scenery is superb. Aside from manicured plants and trees, there's the triumphal European-style Memorial Arch (built for the centennial of George Washington's 1789 inauguration) and giant fountain, which make for top-notch photo-ops. There are plenty of places to kick back and relax, sunbathe on the grass, listen to music, or cool off in the tall fountain spray. Due to its smaller size, however, Washington Square also feels somewhat less overwhelming than Central Park which, of course, is spectacular in its own way. Take advantage of taking it all in, and make sure to explore the surroundings – the essence of romantic 19th-century NYC!

Tip:
The areas close to the park are also good for shopping and – in some cases very cheap – eating, as many students are both foodies and on a budget.
Image Courtesy of Wikimedia and Jean-Christophe BENOIST.