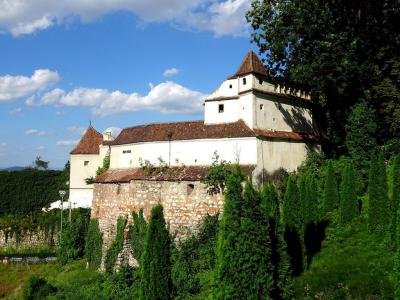 Weavers' Bastion (Bastionul Tesatorilor) is a historic fortification that now functions as a medieval museum. Unlike many of the bastions in the region, it withstood the great fire of 1689. It remains preserved in its original shape.

Construction on the bastion began in 1421. It has four levels with oil wells and two watchtowers, containing rooms for weaving workshops, a sentry room, a ballroom, and a wedding hall. The bastion was built, defended, and maintained by the linen weavers' guild.

The bastion was abandoned in 1750 due to a lack of need for this type of defense. Later, it was used for document storage, a meeting place, and grounds for the confirmation of weaving apprentices. In the early 20th century, the excellent acoustics in the bastion led to its use for operas and concerts.

Today, Weavers' Bastion is part of the County Museum of History. The exhibits show documents and artifacts from archaeological excavations. Concerts and festivals are also regularly held at Weavers' Bastion.
Image Courtesy of Wikimedia and Whitepixels.

Want to visit this sight? Check out these Self-Guided Walking Tours in Brasov. Alternatively, you can download the mobile app "GPSmyCity: Walks in 1K+ Cities" from iTunes App Store or Google Play. The app turns your mobile device to a personal tour guide and it works offline, so no data plan is needed when traveling abroad.