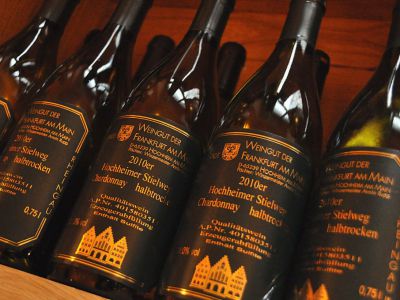 What to buy here: Frankfurt is one of the few German municipalities in the wine business. It has owned a vineyard at the Lohrberg, a modest hill on the northern border of the city, since 1803. Another source for city wine is found outside city limits in nearby Hochheim. The Lohrberg vineyard produces about 10,000 bottles a year. These wines and those from Hochheim can be bought at a wine shop located in an archway on the left side of City Hall at the Roemerberg. The shop’s address is Limpurgergasse 2, 60311 Frankfurt. Hours are Mon-Fri, 9 a.m. until 12:30 p.m. Prices range from five to 82 euros a bottle, the latter for a 2003 Hochheimer Riesling from grapes selected late in the harvest. Sparkling wines also are available. The bottles make nice Frankfurt gifts because they bear distinctive labels with the city seal and landmarks.
Image by Joe Mapother under Creative Commons License.