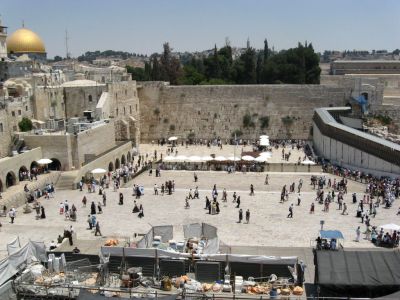 The Western Wall – otherwise known as the Wailing Wall, the Place of Weeping, or the Buraq Wall – is part of the last remaining wall of the Temple Mount in Old Jerusalem, and was built in 19 BCE by Herod the Great. The king expanded the Temple Mount area artificially and had the wall built to retain the soil and filler added during that period.

The wall stands about 100 feet high from its foundation, of which only approximately 60 feet are showing above ground. Out of total 45 stone courses laid, only 28 are visible. The first seven layers are dating from the time of Herod the Great, four more layers were added by the Umayyad Caliphate – around 600 CE, and another 14 during the Ottoman period in the 1860s. Finally, the last three layers were added by the Mufti of Jerusalem in the 1920s. No further additions have occurred since the Six-Day War of 1967.

The size of the stones used in the construction is enormous, some weighing between two and eight tons, and one huge stone near Wilson’s Arch weighing alone a staggering 570 tons!!! The amount of effort put into the project of such magnitude is hard to overestimate.

The Wailing Wall has been the site of Jewish pilgrimage and prayer since at least the 300s CE, and is considered to be one of the holiest places for Jews because of its proximity to the Temple Mount. The name “wailing” derives from the Jewish practice of mourning the loss of the Holy Temple on the Temple Mount. The plaza in front of the wall was built after the Six-Day War as a gathering place for worshipers.

Both men and women are allowed to pray at the wall, although they must use separate entrances. The wall is particularly busy at Sabbath which commences at sundown on Friday and lasts until sundown on Saturday. It has now become a tradition to bring to the wall a prayer request written on a small slip of paper to be stuck between the stones. These papers are removed once a month and taken to the Mount of Olives.

Tip:
When visiting, make sure to bring along a valid ID (passport); expect tight security, and dress modestly.
No pictures are allowed during the Sabbath. The entry is free.
Image Courtesy of Wikimedia and Sustructu.