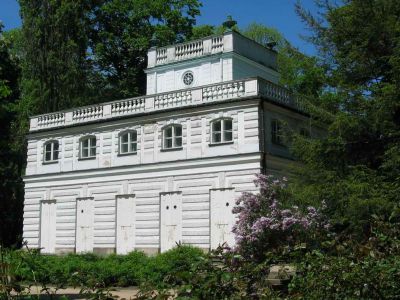 The Little White House, (Biały Domek), is a garden villa built in 1774-76 by Domenico Merlini. It housed Stanisław August Poniatowski's mistress and, for a time, Louis XVIII, who lived here in 1801-05 during his exile from France. Built in the shape of a square, it has identical facades, adorned with rustication, an attic, and a small pavilion at the top. The interiors were decorated by prominent Polish painters of that time, Jan Ścisło and Jan Bogumił Plersch. Although devastated by the Germans during the World War II, many original elements of interior furnishings are preserved. Among the most interesting are the grotesque paintings in the dining room, the 18th century Chinese wallpaper in the Parlor, the king's bed in the bedchamber and the cabinet in the form of an arbor, with paintings by Jan Bogumił Plersch.
Image by Vindur on Wikimedia under Creative Commons License.
Sight description based on wikipedia

It's hard to imagine, except what we know from history, that on these beautiful Warsaw streets, thousands of Jews were herded and forced into cattle cars, on their way to concentration camps in the 1940s. Here, in the location of one of Europe's biggest concentration camps, about 400,000 innocent Jews suffered and died. Take the following tour to visit some of the places relevant to...  view more