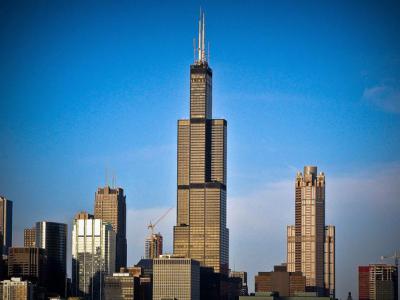 Sears, Roebuck, a Chicago icon since 1906, had outgrown its offices in the city's west area. The search for a new site would not be an easy one. Shifting the headquarters to the suburbs would not do. Company executives began to focus on the western border of the Loop district. The Loop site was finally acquired in 1970.

In subsequent years the tower would undergo renovations and changes in ownership. Sears itself moved out to Hoffman Estates in Illinois in 1990. The building continued to be called Sears Tower until 2009 when Willis Group of London leased part of the building and obtained naming rights. Sears Tower was now Willis Tower.

The Tower was designed by architect Bruce Graham and the structural engineer Fazlur Rahman Khan. The basic design concept was nine square "tubes" bundled in a 3x3 matrix having a square base with 225-foot sides. The Tower was the first building to use this innovative design, both efficient and economic.

The Willis Tower Observation deck on the 103rd floor, called Skydeck, is 1,353 feet above street level. It opened to the public on June 22, 1974. There is a second observation deck on the 99th floor. Retractable glass balconies were installed in a renovation of the Skydeck in 2009. The balconies are all-glass boxes that project up to four feet from the sides of the Tower. Elevators reach the top in 60 seconds.