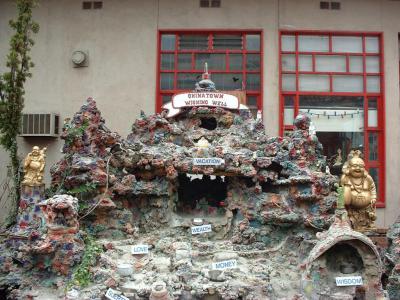 Just inside Central Plaza, near the West Gate, sits one of the oldest landmarks in New Chinatown, the Wishing Well. Designed by artist Professor Henry Liu Hong Kay to emulate the natural stone formation, called the Seven Star Caverns, found in the southern Chinese province of Guangdong, this well takes its name from that scenic spot a thousands of miles away.

Constructed as the centerpiece of Los Angeles' first outdoor mall, it has drawn dreamers of every description since 1938, vacuuming up their pocket change. The structure represents an amalgamation of the Western concept of a magical well with the culturally seeded Chinese beliefs of luck and fortune. This strange-looking sculptural piece is more of an above-ground waterfall diorama than an underground well, and is made of rough, irregularly shaped concrete, not stones set in a circle, and painted in splotches of red, blue, green and yellow, not natural earth tones.

Within a low brick wall lies a pool of water surrounded by a small hill constructed of foliage and moss. Scattered bridges, shrines, pools and statues decorate winding paths leading to a summit. Dead tree branches are carefully arranged on both sides and strands of plastic ivy are draped over a rear area. A small moat partly encircles the front. Turtles and occasional fish can be seen swimming in it. There are tiny pot-bellied smiling Buddha statues perched on the ridges and peaks, alongside various labeled tin bowls for visitors to toss their coins into in the hopes of vacation, love, health, wealth, beauty, wisdom, and money.

A willow tree at the pool was planted by Anna May Wong, the first ever Chinese American Hollywood movie star.
Image by MarieVelde on Wikimedia under Creative Commons License.