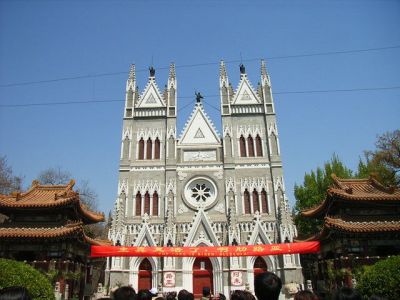 One of the most ornate and grand churches in China, the Xishiku Cathedral is located in the Xicheng District. This Catholic Church affiliated to the Patriotic Catholic Church of China and is home to the Beijing Cardinal Bishop Office.

The Jesuits built this church in 1703 on a land near Zhongnanhai given to them by Qing Dynasty Emperor Kangzi. He gifted the Jesuits with the land in gratitude for treating and curing him of a serious illness. The plaque and calligraphic couplets you find on the door of the cathedral was written by the Emperor.

Emperor Guangxu wished to create a park at Zhongnanhai and moved the cathedral in 1887 to its present location. The park area went on to function as a residence of popular communists such as Zhou Enlai, Deng Xiaoping and Chairman Mao and is today the Chinese Communist Party headquarters.

Today the Xishiku Cathedral stands in all its glory with a rich marble façade. It was redesigned in Gothic style by Bishop Pierre Favier. When the cathedral was besieged by 10,000 boxers during the 1900 Boxer Uprising, Bishop Favier played a major role in successfully defending the church and over 3000 converts. Enjoy the grandeur and soak in the intrinsic essence of this popular Cathedral on your trip to Beijing.
Image by Gene Zhang on Flickr under Creative Commons License.