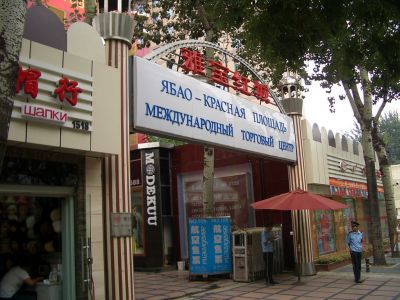 Starting from Chaoyangmenwai, Yabaolu Market runs through right up to Jianguomenwai. A very popular market in Beijing, Yabaolu market features Ritan Park to its west and Beijing Children’s Hospital to its south. This market is popularly referred to as the “Russian Market” as it was previously situated in the Russian quarter of the city. Yabaolu Market is similar to the Chinese Street market. As you enter the market, you will find many shops selling items such as toys, clothes, edibles and seafood. As with most other markets in Beijing, you will be better off with bargaining skills here. The name Yabaolu means “elegant treasure road”. This road was originally called “Mute man’s Alley” or Yaba Hutong. At the northern side of the market, you can find many semi-resident Russian traders. These traders are from Siberia and they have formed their own ethnic and cultural group here. This part of the market is called Russia town. Surprisingly you will find businesses here featuring Russian written names. Many contemporary, modern markets have emerged at Yabaolu Market after the Beijing Olympics. These include the You-Town and Chaowai-Men. These shops predominantly cater to retail shoppers. Tourists enjoy browsing around this popular market in Beijing.
Image by Vmenkov on Wikimedia under Creative Commons License.