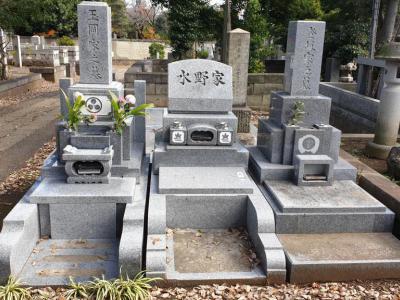 Yanaka Cemetery was once a Buddhist cemetery. This is evidenced by the Buddhist temple, Tennoji, and its large, bronze statue of the Buddha. During the Meiji Restoration, which began in the 1860s, the cemetery was transferred into a public one so that Shinto funerals and burials could take place.

Yanaka Cemetery encompasses more than 1,000 square meters and has about 7,000 graves. Also located on the cemetery grounds are the ruins of a 20th century, five-story pagoda and a large number of cherry trees that line the walkways. The blossoming trees make the cemetery a popular tourist location in late-March and April of each year.

The cemetery is open to guests 24-hours per day. However, the cemetery is not well-lit at night and may be best viewed during daylight hours.
Image Courtesy of Wikimedia and Cabeza2000.