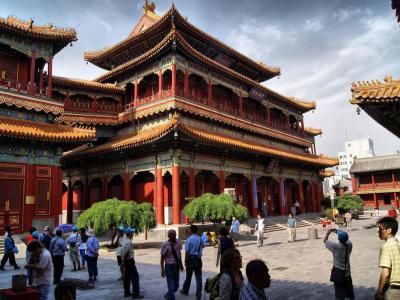 Located in the north east part of Beijing city, Yonghe Temple is popularly known as the Lama Temple. This monastery and temple attached to Tibetan Buddhism’s Geluk School is one of the most important and largest Tibetan Buddhist monasteries and is constructed in Tibetan and Han Chinese style.

Construction of this temple started during the Qing Dynasty in 1694 and originally the building was used as the residence of court eunuchs. Later on, it was converted to Prince Yong’s court. He was the son of Kangxi Emperor and the future Yongzheng Emperor. When he ascended the throne in 1722, Yongzheng converted half of the building into a monastery for the Tibetan Buddhism monks while retaining the other half as the imperial palace. This temple houses his coffin since 1735 when he died.

Qianlong Emperor, his successor, elevated the temple to the imperial status by symbolically changing the turquoise tiles to yellow tiles, usually reserved for emperors. Monks from Tibet and Mongolia started using this monastery as their residence and ever since this Lamasery has grown to be the national center of Lama Administration.

Yonghe Temple has successfully survived the Cultural Revolution of the 1960s-70s, largely due to the protection of Zhou Enlai, then Prime Minister of China. In 1981, the temple was reopened to the public. Today it attracts tourists from all parts of the world.

Why You Should Visit:
The temple is quite beautiful in itself and the largest Buddha carved from a single piece of wood is a major highlight here.

Tip:
Upon entering, you can receive free incense to burn on site or take home as a nice memento. Across the street from the subway exit, there's a tea shop that also sells ice cream, very popular with locals!