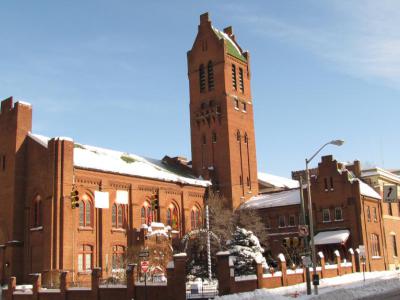 Zion Lutheran Church, also known as the Zion Church of the City of Baltimore (formerly known as the German Lutheran Reformed Church), is a historic Lutheran church located in Baltimore, Maryland, United States. The congregation was founded in 1755 in order to serve the needs of Lutheran immigrants from Germany, as well as Germans from Pennsylvania who moved to Baltimore. It has a bilingual congregation that provides sermons in both German and English. In 1762 the congregation built its first church on Fish Street (later East Fayette Street). It was replaced by a bigger building, the current Zion Church on North Gay Street, erected from 1807 to 1808 in a Georgian/Federal-era style.

An additional expansion of the church to the west along East Lexington Street to North Holliday Street composed of an "Adlersaal" (Parish House), bell tower, parsonage and a enclosed garden designed of Hanseatic North German architecture was constructed under Rev. Julius K. Hoffman in 1912-1913. In the late 1920s, the entire block south of the church was razed to form a monumental square (known as "War Memorial Plaza" or "City Hall Plaza") opposite the Baltimore City Hall of 1875 on the western side and construction at the eastern end of the War Memorial Building with an auditorium, historical exhibit area and veterans organizations offices. On the south side of the church buildings facing the plaza, a new headquarters for the Baltimore City Fire Department was constructed in a Georgian-Federal style complementing the original Zion Church around the corner.
Image Courtesy of Wikimedia and Concord.
Sight description based on Wikipedia.