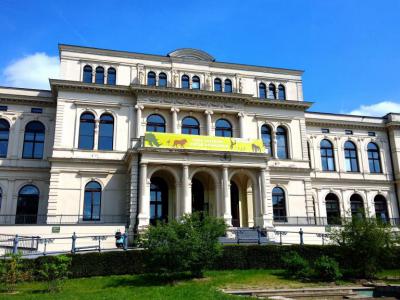 The Frankfurt Zoological Gardens are one of the oldest repositories of zoological exhibits in the world. The present facility is in an area of over 13 acres housing a variety of common and rare species.

The first zoological gardens in Frankfurt were founded in 1858 with Dr. Max Schmidt as their president. The zoo started with 600 animals. Dr. Schmidt had visited zoological parks in several countries and using his vast experience increased the number of animals during his 25-year tenure. Chancellor Otto Von Bismarck presented 2 bears to the zoo at the time. Despite the hardship caused by lack of food and frequent bombing, the director of the Zoo from 1908, Dr. Kurt Priemel made efforts with the help of animal lovers to protect rare and endangered animals, birds and fishes. The entire facility was destroyed in the 1944 bombings and many animals including big cats and elephants had to be put down because of bomb injuries. At the end of WWII, only 40 large animals remained. After the War, the well-known biologist and writer, Dr. Bernhard Grzimek took over the management of the Zoo and not only increased the number of species but improved the facility for the comfort of the animals and visitors.

Why You Should Visit:
Pretty impressive for a city centre zoo! Very good for children/toddlers, too.

Tip:
Go on the feeding hours to see the animals getting fed (check online for specifics).
Food in the Mexican restaurant is good and not overpriced; otherwise, feel free to bring your own picnic and you'll have a great day.