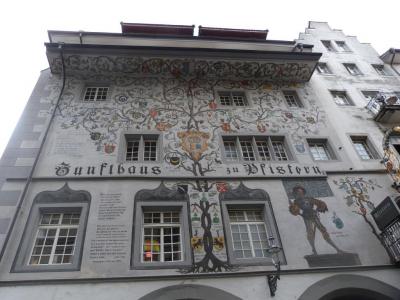 This is one of Lucerne’s most eye-catching buildings, boasting extensive exterior fresco decoration – a mural of the Pfistern family tree hung with coats of arms. Indeed, this is one of the last standing guild halls in the city. The name Pfister comes from the Latin “pistor”, which was what the Romans called bakers. The Germanization of the word turned it into “Pfister”.

The Pfister Guild initially united artisans, bakers and millers, and was founded in 1408. Later, it was joined by boat crews and pie bakers – in 1598 and 1697, respectively. The guild house was the noble gentlemen's meeting place to discuss politics and business, not forgetting some great food and drinks during the process.

Shortly before the guild was dissolved in 1875, the house was auctioned for 80,000 Francs. A century later – in 1977 – after numerous ownership changes, the property was acquired by the Lucerne Association of Pastry Bakers, thus reverting to its original purpose. Now fully reinstated, the house accommodates Pfistern restaurant serving Swiss specialties.
Image Courtesy of Wikimedia and Daieuxetdailleurs.