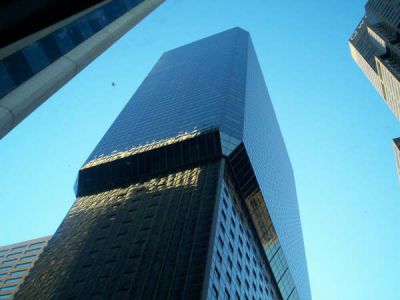 707 17th Street, formerly known as the MCI Building, was completed in 1981, and rises 42 floors and 522 feet (159 m) in height. The building stands as the sixth-tallest building in Denver as of 2010. It was the tallest building in the city at the time of its 1981 completion, and held that distinction for two years until it was surpassed by the 709-foot (216 m) 1801 California Street in 1983. 707 17th Street has a somewhat unique "setfront" design, rather than the usual setback found in other Denver skyscrapers such as 1801 California Street. The building bulges out and becomes wider at its 15th floor, thus the term "setfront". The narrower region at the bottom of the hotel is home to the Marriott Hotel, whereas the upper, wider floors contain most of the commercial space. The building's facade is composed of black glass, and it is an example of international-style "black box" architecture.