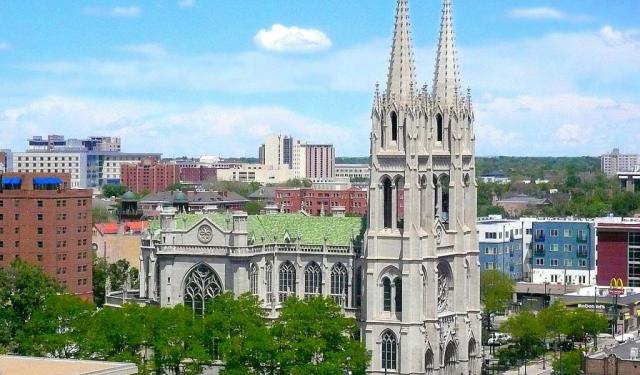 Denver has a wide variety of religious buildings, including churches, temples and cathedrals, each of which is interesting in its own way. Many of Denver's churches date back to the 19th century. Take this self guided walking tour to admire Denver's most beautiful places of worship.
Image Courtesy of Wikimedia and Laxjab2012.
How it works: Download the app "GPSmyCity: Walks in 1K+ Cities" from iTunes App Store or Google Play to your mobile phone or tablet. The app turns your mobile device into a personal tour guide and its built-in GPS navigation functions guide you from one tour stop to next. The app works offline, so no data plan is needed when traveling abroad.

The historic Trinity United Methodist Church of Denver is located near the center of city, about three city blocks north of Civic Center Park. The church was built in 1887 and placed on the National Register of Historic Places in 1970.

Architect Robert S. Roeschlaub designed the church in a Modern Gothic style. Roeschlaub combined Gothic, Rococo and Arts and Crafts styles to create this Modern Gothic look. The exterior of the church is fashioned from Castle Rock rhyolite, including the church's 183 foot tall steeple. The steeple was considered a marvel of its time as it was one of country's tallest towers that was made entirely of stone.

Visitors are welcome at church during Sunday services, though the beauty of the structure can be viewed at any point when walking by. Located on North Broadway, Trinity United Methodist offers a close and easy walk from The Brown Palace Hotel.

Image Courtesy of Wikimedia and Chris06.
2

Central Presbyterian Church is a historic church in downtown Denver. It was built in 1891-92 and designed by well known architect Frank E. Edbrooke in the Richardsonian Romanesque style. The building has been considered one of the three best buildings designed by Edbrooke, and was designed late in his career. To help construct the church, the city's gamblers and saloon keepers were charged money. It was added to the National Register of Historic Places in 1974.

The building is huge, it is a nearly perfect square and is basically a four-tower type with crossing gables of equal height and length. The feeling of massiveness is derived from its great size and large windows and from the use of Colorado sandstone laid in horizontal bands. The walls are sheer and relatively unadorned, rising with a thin and expansive grace. The thin stretched quality is almost exaggerated in the tower where there are long, thin lantern openings topped by ogee arches.

Image Courtesy of Wikimedia and Nyttend.
3

Saint Paul Lutheran Church is an evangelical church built in the Gothic Revival style in 1884. The church is famous for the ritual of Taize, which consists of music, meditation and prayer fusion. This corner building, with its striking and impressive appearance, has been listed on the National Register of Historic Places in 1997.
Image Courtesy of Wikimedia and Nyttend.
4

Temple Emanuel is a well-known Denver synagogue. Built in 1899, this striking temple was built in the Neo-Moorish style and was the first synagogue established in Colorado. With massive domed ceilings and elegant chairs, the temple serves as a home to its Jewish congregation and fosters Jewish values in this region. In 1978, it was listed on the National Register of Historic Places.
Image Courtesy of Wikimedia and Jeffrey Beall.
5

5) Cathedral Basilica of the Immaculate Conception

The Cathedral Basilica of the Immaculate Conception is the cathedral of the Archdiocese of Denver of the Roman Catholic Church. Construction of the cathedral started in 1902 and was completed in 1911.

On August 13 and 14, 1993 (for World Youth Day), Pope John Paul II celebrated Mass at the cathedral, one of only a few cathedrals in the United States so honored.

Architect Leon Coquard of Detroit designed the cathedral in the French Gothic style. Its character is influenced by the 13th-century Saint Nicholas Collegiate church (collégiale Saint-Nicolas) of Munster, Moselle, France, which is the birthplace of Bishop Nicholas Chrysostom Matz, who supervised cathedral construction.

The building is in the shape of a Latin cross measuring 195 by 116 feet (59 by 35 m) with the nave rising to 68 feet (21 m). The main façade houses three entrances and is framed by two 210-foot (64 m) spires. The structure is constructed of Indiana limestone and granite from Gunnison, Colorado. The altar, statuary, and bishop's chair are all made of Carrara marble, while other elements feature Yule marble stone from Marble, Colorado. The 75 stained glass windows are from the Royal Bavarian Art Institute in Munich founded by Franz Xaver Zettler.

On August 7, 1912, lightning struck the west tower causing damage to the upper 25 feet (7.6 m); however, this was repaired before the opening. In June 1997, lightning struck a second time, but this time damaged the east tower. The parish completed work to restore the tower within eight months.

This beautiful cathedral is only steps away from the state Capitol. Its stain glass is breathtaking and the marbles are exceptional.
Image Courtesy of Wikimedia and Laxjab2012.
Sight description based on Wikipedia.