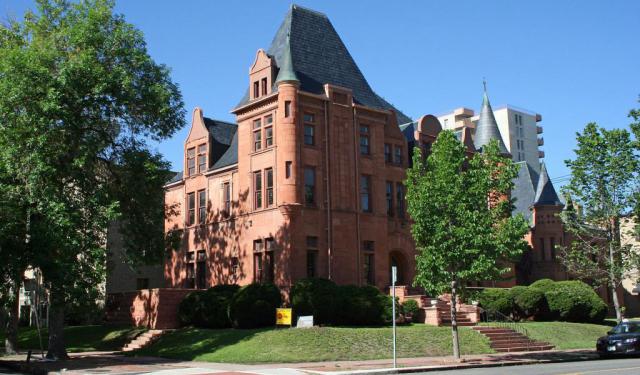 Well-preserved historical homes often tell the tales of their former residents and the city they reside in with more depth and accuracy than any book can offer. The Capitol Hill Neighborhood of Denver used to be dotted with large and beautiful mansions built by the movers and shakers of the city. Luckily, some of these mansions have survived and today they provide a wonderful insight into the past lives of the people who helped shape the city. Follow this self-guided tour to visit some of these magnificent mansions from a bygone era and learn Denver's history.
Image Courtesy of Wikimedia and Jeffrey Beall.
How it works: Download the app "GPSmyCity: Walks in 1K+ Cities" from iTunes App Store or Google Play to your mobile phone or tablet. The app turns your mobile device into a personal tour guide and its built-in GPS navigation functions guide you from one tour stop to next. The app works offline, so no data plan is needed when traveling abroad.

The Byers-Evans House Museum is a Late Victorian home that has since been converted into a museum. This must-see site was built in 1883 by William Byers. Later, it served as a home to Anne Evans, who was known as a prominent arts patron. In fact, Evans was instrumental in the founding of the Denver Art Museum, the Denver Public Library and the Central City Opera.

The house is now owned by the Colorado Historical Society and operated by History Colorado. Located directly behind the Denver Art Museum, the Byers-Evans House Museum is open for guided tours. The house is also home to the Center for Colorado Women's History.

The home was built in an Italianate style and added to over the years. The restoration project, which was begun in 1981, restored the home to the way it looked at the turn of the 20th century. Approximately 90 percent of the house and museum's contents are original belongings of those who previously lived in the home.

Lucky tourists may find that their visit to the Byers-Evans House Museum coincides with one of the many special events that occur onsite. Some of these include book club meetings, writing lessons and cultural events.

Why You Should Visit
The Byers-Evans House Museum is an important part of the city's history. It also offers insight into the important influence women have had in local culture.

Tips
The home is an easy walk from the Denver Art Museum, but visitors should still call in advance to ensure the house is open as there are no self-guided tours. The cost is $8 for adults, $6 for students and seniors, $4 for children under the age of seven and free for members of the military and History Colorado.

The Molly Brown House Museum (also known as House of Lions) is a house located at 1340 Pennsylvania Street in Denver that was the home of American philanthropist, socialite, and activist Margaret Brown. Brown was known as "The Unsinkable Molly Brown" because she survived the sinking of the RMS Titanic. The museum now located in her former home presents exhibits interpreting her life and that of Victorian Denver as well as architectural preservation. The house was listed on the National Register of Historic Places in 1972.

The house was built in the 1880s by architect William A. Lang, incorporating several popular styles of the period, including Queen Anne Style architecture, for the original owners Isaac and Mary Large.

They suffered financially from the crash resulting from the repeal of the Sherman Silver Purchase Act in 1893 and were forced to sell the house. It was purchased by James Joseph Brown (J.J.), Margaret's husband, in 1894 for US$30,000 and the title was transferred to Margaret in 1898, possibly due to J.J.'s deteriorating health.

The Capitol Hill Mansion was built in 1891 in the Richardsonian Romanesque architectural style. The exterior of the home is made from locally sourced, Manitou sandstone. The exterior displays Gothic features, Corinthian columns and Victorian-era turrets.

The original residents of the home were Jeffrey and Mary Keating. Mary Keating was a prominent Denver socialite while Jeffrey was a highly influential real estate developer. It has gone through many changes over the years, from private home to hotel to apartments. It is now operated as a bed and breakfast.

The interior of the Capitol Hill Mansion retains most of its original furnishings, such as stained glass windows, oak paneling and a large, marble fireplace.

The Capitol Hill Mansion is located southeast of the Colorado State Capitol, about halfway between Civic Center Park and the Governor's mansion. Tourists will see a number of historic homes as they explore the area, but the conical roofs and turrets of the Capitol Hill Mansion stand out from among the others.
Image Courtesy of Wikimedia and Jeffrey Beall.
4

The mansion was built in 1891 by Colorado state senator Thomas Croke. Shortly thereafter, Croke sold the mansion to congressman Thomas Patterson. It was then lived in by Patterson's daughter, Margaret, and her husband, Richard Campbell.

The sandstone mansion encompasses four floors and 15,000 square feet. It was added to the National Register of Historic Places in 1973. In 2011, a renovation project began in the house that unearthed a number of artifacts from the mansion's early days. Items such as old newspapers, clothing and eyeglasses were discovered within the walls.

Believers in ghost stories know the Croke-Patterson-Campbell Mansion well. It is considered among the "most haunted" places in Colorado. People have reportedly seen ghostly apparitions, heard strange noises and experienced inexplicable changes in temperature.
Image Courtesy of Wikimedia and Jeffrey Beall.
5

The Crawford Hill Mansion once played a central role in the social life of Denver's high society. During its heydays, the house was considered as Denver's "social capitol" where the city elites schmoozed and partied.

The mansion was built in 1906 for Crawford and Louise Hill. Crawford Hill was a prominent newspaper magnate who inherited the "Denver Republican" upon the death of his father. He was also the second vice president of the Associated Press, director of the Colorado Museum of Natural History and president of a number of land companies and smelting firms.

Louise Hill came from a Memphis aristocratic family, so she was familiar with all the high society rules. She established herself as the leader of Denver's social life and was famous for creating the "Sacred 36", which is a group of individuals considered acceptable to the inner circles of New York and Newport, Rhode Island high society.

Each spring Louise Hill signaled the beginning of Denver’s social season by unveiling a life-size statue of a nude woman holding a bouquet of flowers in her garden. Louise Hill also wrote Denver's first social register.

The three-story mansion is in a French Renaissance Revival style and went through an extensive restoration in 1990s. It is registered as a historical landmark.

Although not available for touring, as today the former mansion serves as a law office, one can still admire its grandness from the outside and imagine the city elites coming and leaving the lavish parties that this place was famous for.
Image Courtesy of Wikimedia and Jeffrey Beall.
6

The Colorado Governor's Mansion was built in 1908. Architects Willis A. Marean and Albert J. Norton designed the mansion in the Colonial Georgian Revival style. It was not originally built as a home for the state governor but for the daughter of Walter Scott Cheesman, a Colorado real estate tycoon.

Gladys Cheesman lived in the home until 1923. At that point, the home was purchased by financier Claude K. Boettcher. In 1959, the governor of Colorado, Stephen McNichols, accepted the home as a gift to the state. Many of the state's governors have since lived in the home, either on a full- or part-time basis.

The public is welcome to tour the grounds of the home, including Governor's Park, which offers ample green space and walking paths. Public tours of the home are free, though visitors should call first to ensure the mansion is open.

The Governor's Mansion is located in the Quality Hill Historic District. It is a popular stop for tourists as it is an easy 30 minute walk from either Civic Center Park. Cheesman Park is also nearby, which offers the Denver Botanic Gardens and the Boettcher Memorial Tropical Conservatory.
Image Courtesy of Jirodrig.
7

Mamie Eisenhower was born to John and Elivera M. Doud in 1896 in Boone, Iowa. Her family moved to Denver in 1905. Her father bought this house in 1906 and moved the family there.

The architectural style of the Doud House is American Foursquare, which is locally called a "Denver Square." The house has a rectangular footprint with external dimensions of 32 feet by 36 feet. The carriage house, originally used to park a car, was remodeled in the 1950s to accommodate the family's servants. During Eisenhower's presidency, the carriage house was used to house Secret Service agents who guarded the family when Eisenhowers were visiting their in-laws.

The Doud House is most noted for various events connected with Mamie and President Eisenhower. Mamie Eisenhower lived in this house from 1906 until 1916. The Eisenhowers were married in the first floor music room on July 1, 1916. Their son, John Eisenhower, was born in Denver in the summer of 1922, while Mamie was living in the house. The Eisenhowers vacationed many times and stayed with their in-laws, so along with Lowry Air Force Base the house came to be known as the Summer White House. President Eisenhower had his heart attack in the house on September 23, 1955, and he was treated at Fitzsimmons Army Hospital in Aurora, Colorado.

After both John and Elivera Doud passed away, Mamie Eisenhower cleaned out the house and put it on the market in July 1961. The house was sold in September 1961. The house is still in private hand and can only be viewed from the outside; it is not available for tours.
Image Courtesy of Jeffrey Beall.
Sight description based on Wikipedia.