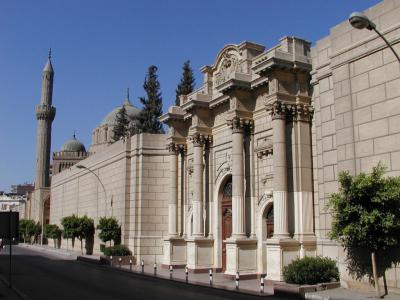 The Abdeen Palace is a large ornate building that is one of the official residences and the main office of the President of Egypt. A portion of the palace is now a museum.

The Abdeen Palace was built on the ruins of an old house belonging to Abdeen Bay, a commander of Mohamed Ali Pasha the Wali of Egypt. In 1872, Khedive Ismail, the then ruler of Egypt moved to the palace from the citadel and made it his official residence. The present building was constructed between 1863 and 1874. It was designed by the French architect Rousseau and Egyptian, Turkish, French and Italian decorators worked on its ornate interiors. It was the scene of the Abdeen Palace incident of 1942 when King Farouk I was forced to abdicate by the British.

The Abdeen Palace has lavish interiors with sculpture, paintings and clocks decorated with pure gold in its parlors and wings. The first floor is now used for visiting foreign dignitaries and the lower floors have museums including the Arms Museum, the Royal Family Museum, the Historical Documents Museum that was recently inaugurated in 2005 and the Presidential Gifts Museum displaying gifts given to the former Egyptian President, Hosni Mubarak.

Why You Should Visit:
One of the few places in Cairo that are nicely maintained – fantastic for fans of historic and ornamental weapons.
The grounds of the compound are lovely. There are a few tables to relax with coffee/tea or a small snack.

Tip:
The ticket counter is not at the entrance to the museum but across the street.
There is an additional fee if you want to take photos inside.