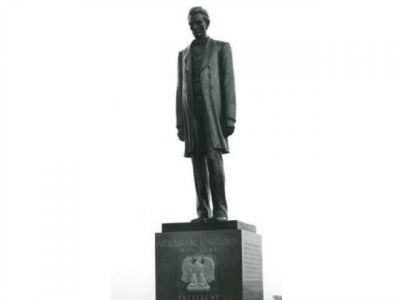 Abraham Lincoln came to Milwaukee on September 30, 1859. He spoke at Wisconsin Agricultural Society, as well as to a group at the Newhall House. In 1916 the Lincoln Memorial Association, a group organized by Mayor Daniel Hoan, decided to commission a sculpture to commemorate the 60th anniversary of this event.

Unfortunately, the sculpture was not able to be built right away as the United States became involved in World War I. In 1932 the Lincoln Memorial Association hosted a national competition for the Abraham Lincoln sculpture's design. Gaetano Cecere, a sculptor from New York City, won. He designed a sculpture that showed a young beardless Lincoln, standing up with his hands at his sides.

The sculptor decided to portray the President without his famous beard because Lincoln did not grow a beard until he was 52. Pencil Points, a magazine on architecture, asserted that Cecere's depiction of Lincoln represented one of the best of the hundreds Loncoln statues around the country. The sculpture's dedication ceremony took place on September 15, 1934.

The sculpture was originally placed on Lincoln Memorial Drive looking west. It was placed in storage in 1954 when the War Memorial Center construction began. It was subsequently placed in front of the Benevolent and Protective Order of Elks Club on East Wisconsin Avenue. It was once again placed on the Lincoln Memorial Drive bridge in 1986, although the statue currently looks north, instead of west.
Image Courtesy of Flickr and Wikipedia Saves Public Art.
Sight description based on Wikipedia.