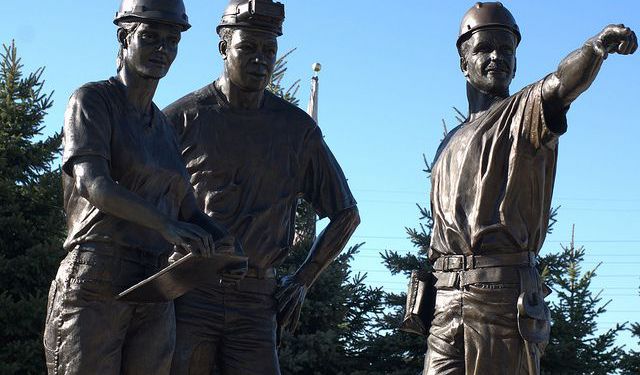 Milwaukee is home to a multitude of statues and monuments of different purposes, from those honoring historic figures to entertaining ones to memorials commemorating war and its heroes and victims. There are also very unusual statues, like that to a duck and its ducklings, for instance. This self-guided walking tour allows you to explore Milwaukee's monuments and statues in their variety.
Image Courtesy of Flickr and Ed Bierman.
How it works: Download the app "GPSmyCity: Walks in 1K+ Cities" from iTunes App Store or Google Play to your mobile phone or tablet. The app turns your mobile device into a personal tour guide and its built-in GPS navigation functions guide you from one tour stop to next. The app works offline, so no data plan is needed when traveling abroad.

Leif Erikson, Leiv Eiriksson or Leif Ericson[note 1] (c. 970 – c. 1020) was a Norse explorer from Iceland. He is thought to have been the first known European to have set foot on continental North America (excluding Greenland), approximately half a millennium before Christopher Columbus. According to the sagas of Icelanders, he established a Norse settlement at Vinland, which is usually interpreted as being coastal North America.

There is ongoing speculation that the settlement made by Leif and his crew corresponds to the remains of a Norse settlement found in Newfoundland, Canada, called L'Anse aux Meadows and which was occupied c. 1000. Later archaeological evidence suggests that Vinland may have been the areas around the Gulf of St. Lawrence and that the L'Anse aux Meadows site was a ship repair station.

Shading his eyes to scan the distance, Leif Ericson stands on a large red sandstone pedestal. Unlike other depictions of Ericson, here he is youthful and clean-shaven. He wears a scale armor shirt, ornamented with breast plates and a studded belt. Underneath, he wears a tunic and leggings with leather sandals. He carries a powder horn over his shoulder and a knife in a decorative sheath at his side. On the sandstone base, the inscription reads, Leif, the discoverer/ son of Erik/ who sailed from Iceland/ and landed on this continent/ A.D. 1000. In runic letters, it also reads, Leif, son of Erik the Red.

Image Courtesy of Wikimedia and James Steakley.
Sight description based on Wikipedia.
2

The Juneau Monument is a public artwork by American artist Richard Henry Park located on the grounds of Juneau Park, Milwaukee. The base of the statue is made of limestone. On top of the base is a bronze statue of Solomon Juneau.

He was the postmaster and the first president of the Village of Milwaukee. He was elected the first mayor of the City of Milwaukee in 1846. Juneau died in 1856 while making an Indian payment for the U.S. Government at a reservation in Keshena.

Shoe manufacturers Charles T. Bradley and William H. Metcalf, friends of the Juneau family, donated the monument as a gift in remembrance of the first mayor of Milwaukee. The sculpture was unveiled on July 6, 1887 by Juneau’s granddaughter, Hattie White.
Image Courtesy of Wikimedia and Sulfur.
Sight description based on Wikipedia.
3

Abraham Lincoln came to Milwaukee on September 30, 1859. He spoke at Wisconsin Agricultural Society, as well as to a group at the Newhall House. In 1916 the Lincoln Memorial Association, a group organized by Mayor Daniel Hoan, decided to commission a sculpture to commemorate the 60th anniversary of this event.

Unfortunately, the sculpture was not able to be built right away as the United States became involved in World War I. In 1932 the Lincoln Memorial Association hosted a national competition for the Abraham Lincoln sculpture's design. Gaetano Cecere, a sculptor from New York City, won. He designed a sculpture that showed a young beardless Lincoln, standing up with his hands at his sides.

The sculptor decided to portray the President without his famous beard because Lincoln did not grow a beard until he was 52. Pencil Points, a magazine on architecture, asserted that Cecere's depiction of Lincoln represented one of the best of the hundreds Loncoln statues around the country. The sculpture's dedication ceremony took place on September 15, 1934.

The sculpture was originally placed on Lincoln Memorial Drive looking west. It was placed in storage in 1954 when the War Memorial Center construction began. It was subsequently placed in front of the Benevolent and Protective Order of Elks Club on East Wisconsin Avenue. It was once again placed on the Lincoln Memorial Drive bridge in 1986, although the statue currently looks north, instead of west.
Image Courtesy of Flickr and Wikipedia Saves Public Art.
Sight description based on Wikipedia.
4

Gertie the Duck is one of the most iconic images of Milwaukee. This duck statue sits on the Wisconsin Avenue bridge west of the Milwaukee River. The bronze statue is four feet high. It was designed by artist Gwendolyn Gillen.

The story of Gertie the Duck has its roots during the second World War. In April 1945 a report of a mallard duck under the Wisconsin Avenue bridge gained public interest. The duck laid nine eggs under the bridge and nested on them despite the heavy motor and foot traffic that would normally disturb most birds. Eventually, five of the ducks hatched and survived. They were put on display first in the window of Gimbels department store. Later they were taken to the Juneau Park lagoon.

The story of Gertie the Duck was featured in newspapers around the city and eventually reached Life Magazine, Reader's Digest and the Daily Express out of the United Kingdom.
Image Courtesy of Flickr and cathyse97.
5

5) Statue of The Fonz

The Bronze Fonz is a public artwork by American artist Gerald P. Sawyer, located on the Milwaukee Riverwalk in downtown Milwaukee. The Bronze Fonz depicts Henry Winkler as "The Fonz," a character in the 1970s television series Happy Days, which was set in Milwaukee.

The sculpture, made of bronze, depicts actor Henry Winkler as he appeared in his role as Arthur Fonzarelli (also known as "Fonzie" or "The Fonz"). Fonzarelli was an iconic character in the 1970s television show Happy Days, a sitcom about a family in 1950s–1960s Milwaukee. He stands in his usual attire, a leather jacket and jeans, and gives a two-handed thumbs up gesture, as he often did in Happy Days.

The sculpture was unveiled on August 18, 2008. Most of the Happy Days cast, including Winkler, Marion Ross, Tom Bosley, Erin Moran, Don Most, and Anson Williams, attended the dedication ceremony.
Image Courtesy of Flickr and daniel.baker.
Sight description based on Wikipedia.
6

The Pere Marquette Statue was funded by Milwaukee Sentinel Newspaper and was a replica of an earlier statue that was an object of vandalism and was removed. The statue is located in Pere Marquette Park. It is completed in bronze and was installed and rededicated on Bastille Day in 1987. The statue represents Pere Marquette standing and holding a cross in his left hand. His right hand is directed upward. Behind the statue there is a granite wall where a river with a Native American in a canoe is represented.
Image Courtesy of Flickr and Wikipedia Saves Public Art.
7

The Victorious Charge is a public artwork by American artist John S. Conway located on the Court of Honor on West Wisconsin Avenue in downtown Milwaukee. The 1898 bronze sculpture is 9'10" high and sits on a 20' square granite pedestal.

Conway's sculpture is the most important nineteenth century Civil War monument in Wisconsin. Four Union soldiers cast in bronze are caught in action, moving forward to victory. One of the soldiers has fallen and supports himself on his left arm, while grasping a piece of the flag staff in his right hand. A young private holds the flag high while stepping over the dying soldier. An officer with a pistol in one hand and a drawn sword in the other continues forward, while another private leans forward holding a bayonet.

Before The Victorious Charge, the standard for Civil War monuments was an idealized portrait of a soldier or an equestrian portrait of an officer. Conway revolutionized the Civil War memorial by depicting a realistic looking group of soldiers in action. His sculpture exudes energy and movement, faithfully capturing the intensity and horrors of battle.

The dedication of The Victorious Charge took place on June 28, 1898, coinciding with a four-day carnival celebrating the Golden Jubilee of Wisconsin's entry into the Union. Tens of thousands of visitors came to Milwaukee for the events. A band played "Marching Through Georgia" as Lydia Ely unveiled the sculpture, and Mayor David S. Rose accepted the monument on behalf of the city.
Image Courtesy of Kenneth C. Zirkel.
Sight description based on Wikipedia.