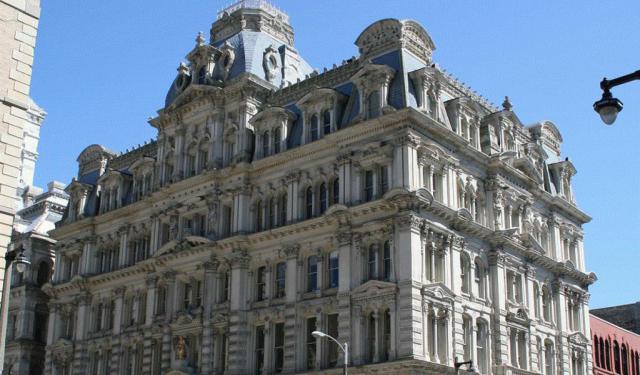 Milwaukee has no shortage of buildings of striking beauty and impressive variety of styles. Amid the abundance of the German-styled architecture, stemming from the city's root in German immigration, visitors to the city can also find buildings of French and Italian influence. Take this self-guided walk to explore the most notable historical edifices in downtown Milwaukee.
Image Courtesy of Flickr and floating_stump.
How it works: Download the app "GPSmyCity: Walks in 1K+ Cities" from iTunes App Store or Google Play to your mobile phone or tablet. The app turns your mobile device into a personal tour guide and its built-in GPS navigation functions guide you from one tour stop to next. The app works offline, so no data plan is needed when traveling abroad.

The iconic Milwaukee City Hall is one of the most recongizable landmarks of the city. It has been used in pop culture to signify Milwaukee. It is also prominent in outlines of the city.

The Milwaukee City Hall was built in 1895. The architect, Henry C. Koch, designed numerous buildings in Wisconsin and around the Midwestern United States. The Flemish Renaissance Revival style used in the City Hall has since been reflected in the nearby buildings to create a cohesive style and to reflect the wide German ancestry of the region.

The building was the tallest structure in Milwaukee through 1973 when the First Wisconsin Center was built. That was also the year that it was added to the National Register of Historic Places.

Visitors can tour the bell tower of the Milwaukee City Hall, which was reassembled from 2006 to 2008. However, tours are not offered on a regular basis and may not be available during the time that the visit occurs. Most tourists who visit the area are delighted to observe the beauty of the structure from street level.

Why You Should Visit
The city hall is one of the most important and recognizable buildings in Milwaukee and a city landmark.

Tips
The bell tower has a large number of steep steps so tourists should be prepared for an arduous trek.

Pabst Theatre was constructed in 1895 to bring theatre to the city of Milwaukee. After more than 100 years in operation, the Pabst is one of the oldest theatres in the country that has seen continuous use since its first performance.

The Pabst was built at the request of Frederick Pabst. He had previously owned the Nunnemacher Grand Opera House, which was destroyed in a fire. The Pabst was built on the same site as the Nunnemacher in a German Renaissance Revival style designed by Otto Strack. Some of the updates that Strack made in his design were the inclusion of all-electric lights, an electric organ, an air conditioner and fire curtains. All of these items were both rare and revolutionary at the time.

The Pabst was named a National Historic Landmark in 1991. It was also named as a landmark of Milwaukee and the state of Wisconsin.

Visitors can enjoy the style of the Pabst from the outside or they can plan to attend a show. Guests can enjoy concerts, plays, ballet performances and other special events.
Image Courtesy of Flickr and compujeramey.
3

The Iron Block Building is a unique, cast iron building located close to the banks of the Milwaukee River at Water Street and Wisconsin Avenue. The building was completed in 1860 using a design by architect George H. Johnson.

The panels of the iron building were cast in New York and shipped to Milwaukee to create a four story structure that would be fire resistant and long-lasting. It was constructed in Italianate style, unlike many of the German-influences found in most of the city's architecture at the time.

The Iron Block Building was originally constructed as a commercial property with the plan to fill the structure with businesses of all types. The top floor of the building was occupied by the Excelsior Lodge of Masons, which is why its first name was the Excelsior Block.

The building fell into disrepair and was deemed to be a public safety threat as portions of the facade had a habit of falling into the street. In 2012, the building was purchased by the Dental Associates who embarked on the task of restoring the Iron Block Building to the structure visitors can see today. It is now a completely renovated building and the home of Dental Associates Family and Specialty Care.
Image Courtesy of Freekee.
4

The Mitchell Building was erected in 1876 as a home to Alexander Mitchell's booming businesses. The building was specifically designed for his banking and insurance companies. It was designed in Second Empire style by architect E. Townsend Mix.

Mix was known for designing a number of ornate buildings in and around the Milwaukee area. Other structures completed by Mix include the National Soliders Home, the Wisconsin Leather Company Building, the Mackie Building and the Immanuel Presbyterian Church. While the Mitchell Building is the best surviving example of Mix's designs, visitors can see his other buildings while they explore the city.

The Mitchell building's material consists of marble, Minnesota granite and limestone. This combination has allowed the building to remain sturdy over the years. In 1973, the Mitchell Building was added to the National Register of Historic Places. The Mitchell building is thought to rest on the site of the home of Milwaukee founder Solomon Juneau.
Image Courtesy of Flickr and floating_stump.
5

The Birchard-Follansbee Block was built by Alanson Follansbee in 1867 from an original design by E. Townsend Mix. The building was designed in the Italianate style with a French Second Empire mansard roof. That roof was later partially replaced when a fifth floor was added in 1899.

The building served as offices and a place of commerce for a number of different businesses. The longest-term occupant was Reckmeyer Furs, who moved into the Birchard-Follansbee Block in 1939 and stayed there for 30 years.

The building has housed the Johnson Bank since 2000. It is a popular stop on walking tours because it is centrally located between Milwaukee Bay and the Milwaukee River. visitors can admire the architecture from outside and even take a peek indoors if they want to see interiors that feature ionic capitals, a beamed ceiling and ornate trim.
Image Courtesy of Wikimedia and James Steakley.
6

The Federal Building has been in use since the late 19th century. It was designed by architect W.J. Edbrooke in a Richardsonian Romanesque style. The building sits on land that was originally owned by Milwaukee's founder, Solomon Juneau.

The five-story building is made from granite and encompasses a full city block. Tourists will see Roman columns and arches, steeply pitched roofs, multiple towers and a belfry. Though it was completed in 1892, more space was added to the building during the Great Depression. A refurbishment project commenced in 1989 when the interior of the building was returned to its original design and colors while the stone and brickwork was improved. This restoration project, which was completed in 1996, also added more office space and a central heating and cooling system.